I have great news! I managed to claim 1st place in the John Hancock tower race in  Boston.See the race results here.

The evening before the race I drove to Worchester, MA and I stayed overnight at the home of my friend Nate “The Great” and his family. It was a pleasure catching up with an old friend while sharing a cup of mead. I also finally got to see his baby daughter and his dog, Dursu.

The next morning, I woke up at 5:45 and was back on the road at 6:00 AM. Breakfast (while driving) consisted of an apple, a cup of yogurt, an English muffin, and some water. I arrived in Boston around 7:00 AM and walked over to the John Hancock building. The building itself is impressive and somewhat intimidating. It is 61 stories tall with mirror-like glass panes covering every square inch. Craning my neck, I could see the sky reflecting off of the upper stories. I couldn’t believe I was about to climb to the top of this building! 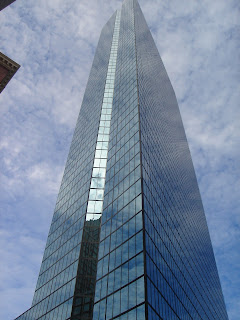 After registering for the race, I popped an Aleve (for the caffeine) and began to slowly warm up. During my warm up I noticed a few people wearing the “West Coast Labels/Running Raw/X-Gym” shirts, which made me even more nervous. If you do a quick Google search, you will quickly realize that runners affiliated with West Coast Labels are among the top racers in the sport.

My warm-up consisted of:


Just before 8:00 AM, they called the elite racers to the front and about 10 of us descended the escalator to the bottom of the John Hancock tower. As the runners from West Coast Labels began queuing up, I realized I needed to get to the front of the line before I ended up at the end of the line. I wanted to avoid this fate since that would mean I would have to pass people in the stairwell during the race, which wastes precious time and energy. I took a deep breath and cut to the front of the line, boldly claiming I planned to finish the race in about 8 minutes (I hope I wasn’t too rude). They looked a little bit surprised, but graciously let me go first. Moments afterward, the race started and I found myself in the first stairwell. It happened so quickly, I had no time to be nervous.

The stairway itself was optimal. The landings were uniformly spaced apart and the handrails were easy to grip. The rails were at just the right height so that I could use my arms to help climb up the staircase. The only flat section was a short hallway near the beginning of the race.

Although I planned to keep a steady pace throughout the race by taking it slow in the beginning, I still went out way too fast. By the time I reached the 10th floor, I was already beginning to tire and I mentally forced myself to slow down. At this point it was hard to even think since my heart rate was near its max. By the time I reached the 30th floor, I looked down at my watch and noticed I was around 3:40, on pace to clock 7:30 for the race. By the 42nd floor my watch showed 5:21 which was slightly faster than my race in Albany (which is about 42 stories). At this point I was extremely fatigued and I could barely keep pace. Even my arms felt like lead. At floor 50, I wanted to stop and I switched to taking one step at a time. However, I could hear people cheering (at what I assume was a water stop) and went back to taking two steps at a time. Each floor was more painful than the next, but I knew I couldn’t stop if I wanted to win the race. I could hear cheers coming from the 61st floor and I wanted to kick up the pace but I simply couldn’t. As soon as I reached the 61st floor I exited the doorway and the finish line was right in front of me. After crossing the line, I collapsed and tried to catch my breath. The clock had just passed the 8:00 minute mark and I knew I had a good race despite going out way too fast.

The race volunteers helped me back to my feet and I stumbled over to the observation deck to wait for the other racers. Ten minutes later, I was finally recovered enough socialize with my fellow racers and enjoy the Boston skyline (although the only landmarks I could identify were the Charles River and Fenway Park).

I introduced myself to a few of the racers wearing the West Coast Labels shirt and to my pleasant surprise, they were all very friendly. After chatting a bit, we finally took the elevator back downstairs and continued our conversation in the lobby.

Soon afterward, the official results were posted and I found out that I came in 1st place with time of 7:58! My time was only 9 seconds slower than last year’s winner (Paul Teti, an Olympic rower). Although I missed the course record, I was still very pleased.

After the award ceremony, I took a few group photos with some of my fellow racers. I exchanged email addresses with a few of my new friends and after our goodbyes, I took a stroll to China town and picked up a pork bun, an egg tart, and a cup of “pearl” coffee (iced coffee with tapioca) for the long road back to Albany. Along the way I also snapped a couple of photos of the John Hancock Tower to remember this awesome event. 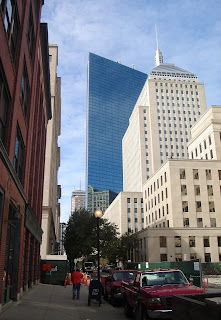 Now that the race is over, I still need to finish raising funds for the National MS Foundation. If you would like to help me reach my goal of raising $250 to help the fight against multiple sclerosis, please click here. Every little bit counts.
Posted by Alex at 3:53 PM