I had a good climb at the Trump Parc in Stamford, Connecticut this weekend. It can be summarized in three words: New. Course. Record!
See the results here.
The evening before the race, I drove down to my friend Tom’s place to stay overnight. We spent the evening playing cards and catching up. The best part of the trip was that I finally got a chance to finally meet his new twin baby boys! They were both so cute… although I couldn’t tell them apart J
Early the next morning I drove down to Stamford. It took about an hour and a half to get to the race, so I had plenty of time to eat breakfast and get caffeinated.
Race check in was at the SBC brewery, which is just few minutes from the Trump Parc. After I got my race number, I met my other “Tower Masters” teammates:  Michael, Ariel, and Stephen. I’ve climbed with both Michael and Ariel before, but it was my first encounter with Stephen.
Stephen is one heck of an athlete. He owns the fastest marathon time of anybody I’ve ever met and he has participated in the Empire State Building Run-up over a dozen times. Thank goodness the Stamford was such a short climb, because I think would have smoked the field if the race was in a taller building. 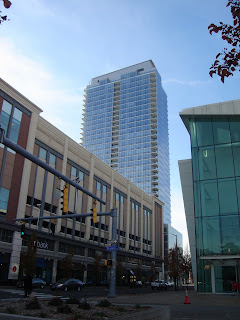 The Tower Masters made our way to the Parc Trump about 10 minutes before race time to use the facilities and get warmed up. With about 5 minutes to go, we left the 7th floor waiting area… and promptly missed our starting time! Apparently, our watches were a few minutes slow. Fortunately, this wasn’t a problem for the race organizers and we just started off at the end of the line. The only issue was warming up. I still needed a few minutes to get the blood pumping and we were short on both time and space. We were literally queued up in a tiny corridor next to emergency stairwell and to make matters worse, the fire exit was propped open which let the cold November weather inside. I did a couple sets of burpee style push-ups and stepped up the start line.
There was just one more problem. Since were now at the back of the queue, there were a bunch of other racers in the stairwell ahead of us. Although they let racers go every 30 seconds to avoid bottle necks I just knew I would still be passing people. I feigned ignorance and missed the next starting time and finally started the race 1 minute behind the previous racer. I held my starting chip to the sensor* and headed up the stairwell.
*Later I would learn that I actually knocked the timing stand over, much to the amusement of my fellow Tower Masters.
I started off a little too quickly. I estimate I was climbing at my “38 seconds” pace and tried to reign in my speed to about “45 seconds”**. Here were the observations I made while I climbed:
**This represents the time it takes to climb up my practice building, which has 145 steps and is about 27.6 meters tall.
1)     The Parc Trump is a very technical course (as far as stairwells go). With only 588 stairs covering 33 flights or so, there are only about 9 stairs per landing. Since the steps themselves are relatively shallow (7 inches tall vs. the 7.5 inch norm) and the race itself is pretty short, I was turning a landing once every 2.5 seconds. To make matters worse, the railing was hard to grip. The Parc Trump uses an uncommon double railing system that has the upper railing situated too high to grip comfortably and has the lower railing out of reach until you’ve completed the turn. Last but not least, the staircase turned to the left, which I’m not very accustomed to.

2)     I forgot to start my stop watch! o_0
Midway through the race the stairway switched direction (clockwise) which I made the turns a bit easier.  However by that point, I could no longer maintain my speed and was forced to slow down to about “45 or 46 seconds” - a bit slower than my target pace. I also caught up to the fellow ahead of me. “Move, Move, Move!” I yelled as I approached. Since the stairwell was narrow and I didn’t want to pass on the left, I simply body checked him to the outside and passed on the inside when he didn't move. I felt bad, but I really didn’t want to lose any time. The same thing happened around floor 22 or so, but this time around it was a girl rather than a guy. I ended up body checking her too, although this time I felt even more embarrassed.
Nearing floor 27, I knew I had about 6 floors to go and I picked up the pace. Although I was winded, I was still able to tap into my anaerobic reserves and accelerate.
At the finish line, I felt tired but I wasn’t truly exhausted. I grabbed a cup of water and waited for my team mates to arrive. I also took a moment to apologize to the two people I body checked during the race. The guy seemed too tired (or pissed) to really pay me any attention, but the girl told me not to worry about it.
Stephen came a little less than a minute behind me and Michael came in another 20 seconds or so later. I could tell Michael really pushed it, since he pretty much collapsed to the ground as he finished. Ariel finished the race about a minute or two behind, so I knew he also put up a pretty respectable time, too. After resting for a few minutes, we all were curious to know our times. Strangely enough, nobody else used a stop watch, so all we had to go by were our finishing times. We’d have to wait until the award ceremony to learn are actual times.
We headed downstairs to the waiting room and Stephen and I participated in a short video interview on behalf of the American Lung Association. Ariel and I also received complimentary massages. J
Eventually we made it back to the SBC Brewery and chowed down on the free buffet (carrots and pasta). Then around 1:00 PM or so, the official results were in:
The Tower Masters – 1st place team
Alex – 1st place 2:46 (new course record!)
Michael – 2nd place 3:00 (3rd fastest time ever!)
Stephen – 4th place 3:13 (just 4 seconds behind 3rd place)
Ariel – 31st place 4:37 (out of about 160 racers, this is still in the top 20%)


Before we headed home, we chatted with Paul Curley, who came in 3rd. He is a former Cyclo-cross champion and he works with the American Lung Association to coordinate stair climbing races. One day I’d like follow in his footsteps since I love stair climbing and I really want to help others who suffer with asthma.


I had a wonderful time this past weekend and I hope to climb the Parc Trump again next year. Now that I’ve done the race, here is how I hope to improve.

1)     Start off just a little slower to prevent slowing down in the middle of the race.
2)     Practice the rails (easier said than done since I’ve rarely seen this type of railing)
3)     Drop the hammer before floor 24 and push till exhaustion.
4)     Either start first, or wait at least 2 extra minutes before starting.
Posted by Alex at 1:26 PM