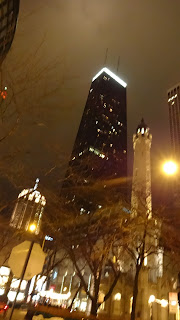 I've been going non-stop for nearly two weeks and before I forget, I had better document what I learned at Hustle up the Hancock.

My travel schedule was brutal. I left my house around 8:30 AM, drove to the Metro North station in Poughkeepsie, took the train to Grand Central Station in NYC, took the subway to Queens, hopped the Q33 bus to LaGuardia, flew to O’Hare in Chicago, rode the “L” to down town, and then walked to the Hancock building to meet a bunch of other climbers for dinner.

At dinner I was finally able to relax. I met up with many of my climbing buddies and chatted about the upcoming race. I always enjoy pre-race team dinners since it  always helps calm my nerves. After dinner, I spent the night at the famed Casa de David.*
*Special thanks go out to David Hanley for hosting me!
The next morning we were out the door by 6:00 AM, but got stuck in traffic right outside of Chicago**. All three lanes of the interstate were completely shut down and after about 10-15 minutes of waiting, we were forced to back up the car to the previous exit and take a detour.
** I was saddened to learn that the highway was blocked off because a drunk driver hit another vehicle and killed a 29 year old woman around 5:45 that morning.

With only a few minutes to spare, David dropped me off at the tower entrance and he parked the car in the parking garage. We made it in time, but unfortunately missed the elite group photo.

I did a quick warm-up consisting of active stretching and burpees in order to get ready to climb.

Afterward I got in line to wait for the start. I had bib #4 which meant I was sandwiched between Kristen (#3) and Cindy (#5). Before we started, Sproule introduced me to Cindy. She asked if I wouldn't mind getting out of the way if she needed to pass me. Although I told her I’d be happy to let her through on the inside lane, I was really thinking, “Good luck, ‘cause I’m not planning to let you catch me.” I knew I had good chance of staying ahead of Cindy because her PB is just under 11:00 minutes which was right around my goal time for this year’s race.

I found our brief conversation somewhat amusing because during last night’s dinner, Kristen asked me almost the same thing. She wondered if I tended to go out fast at the start of a race. She was worried I’d catch up and pass her at the beginning of the race, such that she would end up catching me near the end (i.e. when exerting energy to pass *really* sucks).

In order to satisfy both girls, I would have to go fast enough to keep in front of Cindy, but slow enough not to interfere with Kristen. Yep, it was going to be an interesting race.

When it was finally my turn to start, I set my metronome to 91 bpm and entered the stairwell. Last year I went out at 93 bpm and faded in the upper levels so this year I wanted to go out a little bit more conservatively.

I climbed up the stairwell to the beat of my metronome, making sure I kept only one foot on the landings. As I climbed, I could hear Cindy slowly catching up to me. By the 10th floor I could see her coming from behind. At the same time, I was slowly catching up to Kristen. For the next few floors we were all bunched up together.

I had a bit of a dilemma on my hands. Although I didn’t want to get passed by Cindy (for sake of my male pride), I also didn’t want to pass Kristen. Ever since the Willis Tower race back in 2011, Kristen has owned me in tall buildings, normally coming in 10-20 seconds ahead of me. Since she is such a strong climber, perhaps it was better just to stay behind and let her set the pace.

After one or two more floors I finally made up my mind. Since I was still feeling pretty strong and Kristen was going slower than the beat of my metronome, I decided to make a move up to the front. I moved up to Kristen and told her I didn’t think I’d be catching up with her this soon in the race. On the next landing she let me go by on the inside. At that point, it appeared that Cindy no longer wanted to chase me and was content to stay behind her biggest rival. Slowly but surely I pulled away from the two girls. 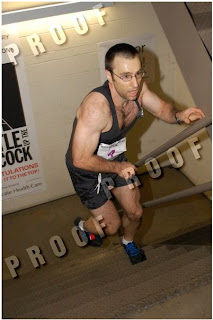 By the upper 20s, I could no longer see or hear Kristen & Cindy and I was left with a clear stairwell. At that point I knew it would be a lonely climb. The only people ahead of me were Justin, Jesse, and Sproule, and I hadn’t a ghost of a chance of catching any of them.

By the lower/mid 30s, I was starting to have trouble keeping up to the beat of metronome. Not only was my heart rate starting to cross the threshold, but my calves were starting to tighten up. At that point my turns were becoming sloppy and I began two-stepping some of the landings. Knowing I still had the majority of the building ahead of me, I decided to dial down my metronome to 88 bpm in order avoid blowing up.

Strangely enough, I could hear another climber up ahead. It obviously wasn’t one of the other elites because I could tell whoever was ahead of me was running up the stairs. At that point I assumed it was just another volunteer trying out the course for themselves, but 5-10 floors it became apparent that it was another racer in it for the long haul.

Eventually I made it to the halfway point and passed the other racer (not necessarily in that order – I can’t remember). The racer ahead of me turned out to be a kid, possibly old enough to be junior high. Sure enough, he was in the race and running up the stairs! I was actually a little surprised because I don’t remember him starting the race, but here he was halfway up the Hancock.

When I finally reached the half-way point, my watch read 5:20, which was slightly ahead of schedule. That was good news because although I was starting to fade, I felt I still had a good shot at breaking the 11 minute mark. The 10 second cushion meant I could do the 2nd half of the race 20 seconds slower than the first and still reach my goal. Coupled with last minute surge, I felt pretty good about my chances.

I continued the long climb in solitude with only my metronome and the occasional group of volunteers keeping me company. By the lower 60s, I was really feeling the pain. Although I was keeping to the beat of my metronome, I was no longer trying to keep one foot on the landings. I was also still cognizant of Cindy and Kristen somewhere behind me; although I couldn’t hear or see them, I figured that at any moment they would come from behind. To make matters worse, my left shoulder was on fire.

Fortunately, I was able to push through the discomfort and by the mid-70s, I felt my confidence begin to soar. I realized that Cindy and Kristen had no chance of catching me and I got my 2nd wind. For the next few floors I decided to push the pace and go back to one-stepping the landings.  However, after a few floors my heart rate was starting to rise and I abandoned the surge. I contemplated lowering my metronome to around 85 so that I could continue one stepping the landings, but rather than spend time fiddling with my gadget (in an oxygen deprived state) it was easier to let it be and just live with two stepping the landings.

Right about at floor 83, I began my late race surge, which was a few floors sooner than originally planned. My heart rate was well into the redzone, but my legs still felt pretty good. Since neither Kristen nor Cindy were in sight, I felt pretty good about my race. I ignored my metronome and pushed the pace a little bit harder until I had reached the top floor. After crossing the finish line I looked down at my watch. In stark black letters it read 11:07. Although winded,  I avoided falling to the ground.

Several emotions hit me at once. On one hand I was disappointed that I didn’t break the 11 minute mark, but on the other hand I was happy that I beat last years’ time. I was also a bit relieved. 11:07 wasn’t a great time, but it wasn’t terrible either. I was actually pretty worried that my times would be significantly slower than the previous year*. Last but not least, I felt a little bit hollow inside. I should have been happy to finally come in ahead of Kristen & Cindy, but since neither girl had a good race (they both own PBs under 11 minutes) it seemed like an empty victory.

*I had just recovered from a rather lengthy illness and my fitness levels were (and still are) well below pre-sickness levels. An 11:07 meant I was still in decent shape and could still compete at a high level.

After the race I hung I chatted a bit with my climbing friends and eventually headed back downstairs to attend the post-race buffet at the Hilton. I loaded up on as many goodies as the organizers would allow since it would be a long flight home and I didn't want to waste time shopping for food.

Since I had a plane to catch, I hastily said my goodbyes and left the building around 9:30 AM to catch my 12:02 flight back to New York. I’m glad I left when I did; the Red line wasn't traveling south and I had to walk to a different Brown/Purple station in order to make my connection. The travel home was just as brutal, although this time around I would be at JFK airport rather than LaGuardia. I finally made it home around 7:00 PM.


Effort: B ; I had some extra juice left in the tank, but not much.
Strategy: B+ ; I went out slightly too fast, but not by much. I should have calculated & memorized my time splits for the 2nd half of the race.
Execution: B ; I did a fine job dialing down my metronome after I realized 91 bpm was overly aggressive. On the other hand, I should have used my watch during the 2nd half of the race.
Technique: B ; Used the rails effectively, but two stepped the landings for a good part of the race.
Overall: B+ ; I’m pleased at setting a PB, even if I didn’t reach my goal time. This was an excellent learning experience.

See the overall results of the race here.