Editor's Note: I'm finally less than a month behind in my blog! This post was originally created a few days after the Albany Corning Tower race (March 7th, 2013). Unfortunately there aren't any race day pictures in this post, since I left my camera at home. However, a couple days before the race, I was contacted by the Schenectady Gazette for an interview about the upcoming race. I saved a copy of the article for your viewing pleasure. You probably will have to download these pictures in order to read it. 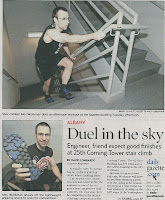 
The results from the Albany Corning tower are in. I did well, but not good enough to capture 1st place. That award belongs to my friend David Tromp. See the full results here.

I’ve been traveling for races pretty non-stop for the last couple weeks so it was nice to finally have a race at home. Since I’ve been so busy, it has been a challenge to balance training, tapering, and racing. Fortunately, I’ve gotten to know my body pretty well, so I think I handled everything just right. Here was my training log in preparation for this race:
·        Saturday: Race in Los Vegas
·        Sunday: Off (traveling)
·        Monday: Weights (hard core workout)
·        Tuesday: Long intervals on the Precor Stepper (hard core cardio)
·        Wednesday: Light spinning class
·        Thursday noon: Very light pacing practice (4 x 40 seconds up local stairwell @ race pace)
·        Thursday evening: Corning Tower Race

Beyond Master's Races, this event is probably the most serious event on my racing calendar since the Corning Tower is on my home turf. As such, I’ve taken this race seriously over the last two seasons. This year, however, with so many back-to-back races, I had very little time to mentally prepare. Fortunately, rereading my blog from 2012 was really helpful in getting ready for the race. My notes from 2012 told me exactly what to expect and how to tackle the building. My race plan was basically the same as in 2012 with just a couple minor adjustments:
1)      Set my metronome at 114 bpm. This is 2 bpm faster than last year since I’m in a little better shape and I wanted to break 4:35. Last years’ time was just over 4:39.
2)      Start the race smoothly, using my metronome to reel in my pace.
3)      Aim for 2:10 to 2:15 at floor 21.
4)      Start accelerating at floor 30
5)      Push very hard at floor 36 until the end.

I parked my car at the lot between the Church and the Museum (for free) and arrived at the Corning Tower around 6:30 PM. I soon met up with David to deliver his Stratosphere trophy.  After chatting with David, Hal, and a few other racers, I started preparing for the race. 30 minutes before the race, I started my active stretches and then moved into my burpee routine to get warmed up (12 burpees + 3 minute rest; repeat). Shortly after 7:30, the organizers lined us up and they led us upstairs to the start line.

Right around 7:35, the race was on! Since I was seeded 2nd, I hopped into the stairwell 10 seconds after David. Right at the start I sprinted up the first short flight of stairs but quickly slowed down and climbed to the beat of my metronome. With the adrenaline rush of the start, the metronome really helped me reign in my speed.

The floors passed by quickly as expected in such a short race. The rails were very easy to grip, but I was having trouble executing the turns efficiently. Just like last year, I felt more comfortable using only the inside rails to pull myself up, but now and then I forced myself to switch to using both sides in order to prevent my arms from being fatigued. It turns out that this wouldn’t be an issue; the stairs eventually switch direction at the first transition point, so arm fatigue doesn’t really come into play.

In the upper teens I realized that I forgot to set my stopwatch. I was a bit upset at myself since I wanted to check my split at the half way point. Drat! I had no choice but to continue upwards.

As soon as I hit floor 30, I cranked the pace up a notch. At this point the metronome was still helpful even though I was no longer climbing to the beat. Basically, I just made sure I was going faster than my metronome.

I was really hurting at this point, but I knew I the race would end in perhaps another minute and a half. It became a mental challenge; my heart and lungs wanted to me to slow down, but I still had strength in my legs. I willed myself to go faster and my legs responded. I quickly glanced up to see if I could see David, but it was pointless. I could hear cheering from the volunteers, but I couldn’t actually hear or see David. I knew I must be pretty close behind, but there just wasn’t any way to tell.

At floor 36 I still couldn’t hear David. I knew I was having a pretty good race, but I simply wasn’t closing in. There were only six or seven more levels to go so just like I planned, I kicked it into another gear. At this point, it felt like I was moving in slow motion. My heart and lungs were screaming, but my legs were still responding well. As each floor passed by, I felt like I could go a little faster. Floor by floor I kept adding speed, but I still felt like I had more to give. With only a couple more levels to go, I thought to myself “why aren’t I going all out? The race is going to end in a matter of seconds and I’m still not going all out!”.

I sprinted the remaining few flights, but I had nearly reached my limit. My legs finally started to buckle on the last flight and I tripped up on the last set of steps*. I quickly recovered and ran to the finish line.
*strangely enough, I tripped in almost the same place as last year!

I stood with my hands on my knees huffing and puffing for a few moments, eventually greeting David when I could finally stand up straight. Since I didn’t have my watch, I had no idea what my time was, but David asserted that we both set PBs. The timers at the top debated for a few moments to figure out who had won (since they only had access to the finish times, not the start time). It sounded like a close race, and for a moment I had a glimmer of a hope of placing first.

After a couple minutes, the other climbers started appearing and I greeted the next few climbers to finish. I then walked over to the beverage table to grab a bottle of water and sat down for a well-needed rest.

After finding out my time, I headed downstairs to grab a few sandwiches for dinner and congratulate David. Unfortunately, I couldn’t stay for the award ceremony but David promised to accept my award on my behalf and deliver it to me at the next race.

Final Thoughts:
·        I had a sound strategy, but I could have maintained a faster pace throughout most of the race (i.e. from floors 1-30). Next year I’ll have to set my metronome a few bpm faster.
·        My biggest weakness is still my cardiovascular fitness. It is coming back slowly but steadily from my peak in November, but really I have to take it to an even higher level.
·        My biggest strength is my leg muscles. During last years’ race, the lactic acid build-up in my legs was pretty intense and my legs hurt pretty bad for several minutes. This year, it was pretty minimal. I recovered pretty quickly this time around.
·        Albany is harder than any race I’ve done on the circuit, and David Tromp agrees. Nearly the whole race is done beyond threshold. It hurts.
·        My lungs hurt much worse in Albany then either Vegas or Chicago. Fortunately, the coughing subsided the next day.
·        Next year, I should take a day off and play around in the stairwell. Unfortunately, the state buildings close at 6:00 PM and I cannot feasibly use them to train.