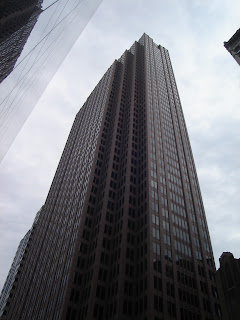 On Friday evening I will be heading to Pennsylvania to participate in the Fight for Air climb in Philadelphia at 3 Logan Square (formerly the Bell Atlantic Tower). At 50 flights (in a 53 story building) this race is about two and a half minutes longer than my comfort zone.  The course is about 205 meters tall, it is caught right in the no man's land between a sprint climb and a tall tower climb. Compared to similar races I've done, it is taller than the Corning Tower (170 m)* but shorter than One Penn Plaza (213 m)*.
*Estimated racing elevation, not building height.

Frankly, I'm more nervous than I should be. I'm not expected to win the race since tall buildings are not my forte and David Tromp will be racing.  However, I should be able to get a podium spot assuming the feild is similar to last year's. Really, the only person I'm racing against is myself, and I'm afraid of underachieving to my own standard.

Race Predictions:
My own predictions (based on faulty building data) show that I should complete the race in about 6 minutes. From experience, I know I typically race a bit slower in taller buildings. Therefore this indicates my time will be closer to 6:15.
Looking at the lineup from last year, the main competition was:

Combining all four predictions, I'm expecting to finish the race between 6:15 and 6:30 and my official goal will be to finish in 6:15 or less. I would expect this time would be good enough for 2nd or 3rd place. Lets just hope I don't get Sprouled* again.
*Sprouled (V). To compete in a race and get humbled by unknown or last minute participant.

Racing Strategy:
My assumptions about the course are as follows:  205 meters of climbing with 1088 steps, each about 7.5 inch tall. I assume the race will end on the 55th floor (which holds a banquet hall). Since the race covers 50 flights of stairs, I assume the race will start on the 5th floor and the halfway point will be on the 30th floor.
1) Leave before 6:00 AM in order to  get to the race before 8 AM (I have nearly a 2 hour drive). Breakfast in car: Yogurt, Apple, & raisin english muffin
2) Take caffeine at 7:00 AM.
3) Arrive at the race and check in. Confirm the height of the stairs. Take a ruler just in case. Set my metronome to 108 bpm for 7.5 inch steps or 101 bpm for 8 inch steps. Possibly get into the stairwell for a look. Time will be tight.
4) Warm Up Routine starting at 8:10 at the latest. Burpees & Jacks as usual.
5) Get toward the front of the line. Start 2nd behind David if possible.
6) Check my time on floor 30. My goal time at this point will be 3:10. Adjust speed as necessary.  I should be very winded at this point, but my legs should still have power.
7) Kick it up a notch on floor 40, if possible. less than 2 minutes to climb.
8) Accelerate on floor 50. Push to the breaking point by floor 53 and maintain till the end. Collapse on the floor!


Race Day:
Honestly, I had a bit of negative energy* in the days leading up to the race. However, I tried to stay positive and everything turned out fine. In fact, things turned out much better than I had expected by far! Check out the race results here.
*negative thoughts, stress, anxiety, etc. which I feel are detrimental to my performance both physically and mentally.


The couple days leading up to the race didn't bode well. I emailed the race organizers to see if they offered any discounts for the registration fee. Since all the other American Lung Association events I've attended (New Haven, Stanford, Hartford, & NYC) and even the MS climb at 30 Rock have all offered discounts when asked. The bottom line was that this climb didn't offer any discounts and the organizers had never even heard of such a discount program. I felt the organizers became a bit defensive when I explained that other ALA climbs offered discounts and showed them the features of their very own website that enabled registration discounts.


The day before the race was another disappointment. Not only wasn't I registered with my team (Brianna's Boys - aka the Tower Masters) but I was placed in the 3rd elite wave. Not a good omen.

Although I was already frustrated with this race, I was determined to stay positive and not to let it impact my performance. Fortunately, my friends came to the rescue. I spent Thursday evening playing games at my friend's house and I had such a good time I simply forgot about racing. The night before the race was also therapeutic since I slept over at my parents' place and was able to spend some quality time with my family.

The day of the race, I woke up at 5:15 AM to get ready. We were out the door well before 6:00 AM and we reached Philly before 8:00 AM. We easily found 3 Logan Square and soon enough I ran into Warren, my friend & team captain. He has done the race several times and assured me that even though I was scheduled to start almost last, I should be able to get to the front of the pack without any trouble. He then showed me the actual stair case. I took out my ruler and measured a sampling of the steps on the first few floors. I then took the elevator to the observation deck to measure the stairs near the top*. It turns out the steps are pretty shallow with a height of only 6.75 inches. Special thanks to my friends Michael & Jim who warned me via email that the steps were relatively shallow.
*One of the few instances where I've actually taken an elevator going up in recent memory.


I began my warm up in earnest (Burpees & Jacks) and when they called the first wave of elites to get ready, I was already waiting outside*. When it was time to line up, I moved into the 9th spot with my friend Steve starting right behind. Since this heat was "reserved" for the double climbers, I figured I should let some of the other competitive double climbers go first, but at the same time the 9th spot would ensure that I wouldn't have to pass too many people.
*Full disclosure: I totally ignored the National Anthem during my warm up. Since I was already outside when they began singing, I didn't even notice the anthem until they were partway through. Fortunately I was so close to the sidewalk, so few people noticed my rudeness.


In the Stairwell:
With a cheer, David was off and climbing. The organizers let the climbers into the stairwell once every 10 - 15 seconds and soon enough I was climbing too. Right from the beginning, I knew the pace was brutal. I could barely keep up to the metronome, especially around the landings. My friend Steve was slowly catching up, but by the time I hit the 10th floor I could no longer hear him climbing. I knew I couldn't maintain this pace for another 5 minutes, so I simply ignored my metronome.

The stairwell itself was uniform and the only irregular feature of the staircase was a long hallway on the 2nd floor which took about 4 seconds to traverse. One difficult aspect of the climb was traversing the turns.  Since I was climbing at such a high rate, I had trouble maneuvering around them so quickly. Adding to the difficultly, was the fact that all but the first floor turned to my weaker left side. Fortunately, the rails  were easy to grip, being made of thick tubular piping and they were spaced close enough apart to use both at once.  As an added bonus, the air conditioning was turned on and the blowers blew air with such force that they actually helped push climbers up the staircase!

One by one I passed the other climbers ahead of me. Although I was climbing behind the beat of my metronome, I was still going at a pretty fast rate and I was hurting by the time I was halfway through the race. The biggest problem I face was that I couldn't see the floor numbers and I had to ask the race volunteers where I was. I glanced at my watch somewhere in the lower 20s and since I was still below the 3 minute mark, I know I was more or less on pace.

I struggled during the 2nd half of the race and I quickly went into survival mode. This was the most challenging part of the race because my body was hurting and the top still seemed like a long way off. Although I could keep up the pace in the short term I was having serious doubts about keeping up the pace for another 3 minutes or so. I'm sure I slowed down in the upper 20s or lower 30s, but at least I could still keep up to my metronome in the middle of each flight. By floor 35 my left arm was hurting so bad that I switched from using only the inside rail to using both rails at once. I was in a pretty poor mental state. Sometime around the 40th floor I started to come to my senses. I was almost finished the race and I knew I had enough energy to finish. This was my make or break floor and I told myself to go for it. I was angry I let my pace slip for the last 15 floors and I increased my pace a bit. A couple floors later I readied myself for the final sprint and went faster with each flight.  With three floors to go I could hear the cheering from the top and I climbed as fast as my legs and arms would allow. I ran across the timing mat and glanced at my watch. I had finished the race in under 6:03 (6:01 official), shattering my goal time of 6:15!

At the top, I still had enough energy to walk around, although my legs and arms were burning since they were full of lactic acid. All in all, I had a solid race, although I certainly could have pushed myself a bit faster in the last half of the race. For comparison, my effort level was somewhere between the Corning Tower and One Penn Plaza races.

I walked over to my family for a quick celebration and then went over to David who had already finished the race and was recovering. He had a blistering time of 5:53 (5:49 official)! Next came Steve who clocked in at 6:34, a huge improvement (14 seconds) over last year.
About 10 minutes later, the Century climbers (i.e. those signed up to do two climbs) were asked to head back downstairs. Although I wasn't doing the multi-climb I head downstairs to give the course another try just for fun. I did the climb in about 8:00 minutes and it felt great. For once I could actually relax, offer encouragement to other climbers, and enjoy climbing a tall staircase! 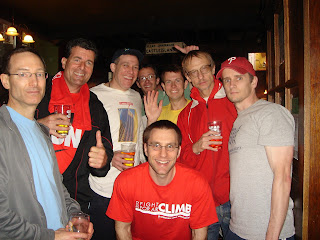 After the race, we headed down to the Tir na Nog bar to eat a few appetizers, get our event T-shirts, and attend the award ceremony. All in all, our team did great. "Brianna's Boys" easily won the team event. David swept both the single and multi climb events. Steve, Mark, and I all won our age groups and Jim came in 2nd in his age group.
Final thoughts: