5/16: Bennington is only a few days away and I’m excited! I expect a smaller group of elite climbers this year compared to the last few years, so I believe the primary “competition” will be against the times from previous years.
The race course is only 61 meters tall and has 435 steps. Since the stair case is continuous and wraps around the inside wall of the Bennington Monument it should have fewer turns than my practice stair case and should pretty fast. On the other hand, I’m seen a video of the 2009 climb and the inner rails don’t look very suitable for climbing.
Knowing this, I’m predicting a time of 1:18. This pace is on par with my normal practice pace, so it should be achievable.
My primary concern is the position of the rails. Although I climb pretty fast without the rails, I’ll be several seconds slower without them. From experience in my practice course, my legs give out sooner when I don’t use the rails*. My other worry is the last 20 or so steps up a narrow spiral staircase. From the video, it looks tricky and I could potentially lose a couple precious seconds.
*On a typical stair workout I’ll go up and down 7 flights a total of 12 times and I alternate between using the outside rails, no rails, and the inside rails. My legs almost never give out when I use the rails, but when I forgo the rails my legs start to give out near the top.  During my 1st run-up without rails (my 3rd trial) my legs give out near the 7th floor. In later run-ups (the 6th, 9th, and 12th trials) my legs give out even sooner; often as soon as I reach the 6th floor. Going up the last flight of stairs is particularly challenging and although my speed is not severely impacted, I know I wouldn’t be able to maintain the pace for much longer.
Because this is such a short race, my racing strategy will be quite simple. Go just a bit faster than my practice pace for the first 45 seconds. Use the rails as much as possible to delay leg fatigue. Then turn on the after burners if at all possible. Once my legs start to give out, I only have a 10 second window to keep pace before I start to slow down. As long as my legs feel okay at 45 seconds, I should be able to break 1:20 without too much problem.
Here is my pre-race to-do list:
1)      Go to bed by 11:00 PM the night before.
2)      Wake up at 7:30 AM. Have a light breakfast (yogurt, raisin english muffin, + banana)
3)      On the road by 8:00. Eat an apple during the drive. Arrive around 9:00 AM.
4)      Drink my caffeine drink at check-in @ 9:15.
5)      Try to enter the stairwell before the race in order to practice using the rails, both at the bottom and the top of the course.
6)      Warm-up 15 minutes before race time: Burpees & Jacks.
7)      Race at 10:00 AM!
5/18 Update: After re-reviewing some of the videos from 2009, 2010, & 2011, I have a much better idea of the stairwell layout. It appears that I will be able to use the rails effectively, although the inner railing looks to be positioned a bit higher than I’d prefer. Additionally, the grade of the staircase (rise/run) appears to be a bit shallow, meaning there will be a bit of a horizontal element to the race, which puts me at a bit of a disadvantage since I’m not a runner. I admit to being a little bit intimidated by the speed of prior year participants in the videos (Jean-Francois Harvey, Jesse Berg, Tim Van Orden, Justin Stewart, etc.) and I’m having a hard time visualizing how I’m going to match their pace. On the other hand, I know my limits quite well and assuming the height of the observation deck is truly 61 meters, I should be clocking in under 1:20.
I'm still keeping my official race prediction at 1:18... let's do it!
Posted by Alex at 1:52 PM No comments: 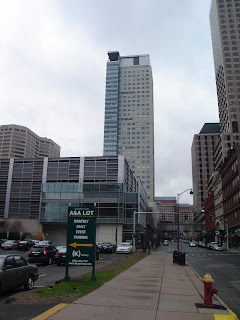 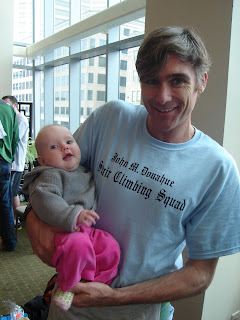