The official results are in, and it turns out I was bumped down a spot down to 19th place overall, which still puts me in the top 20! See the results here.


For those of you unfamiliar with stair races, you might ask how a racer could get bumped down a place hours after the finish. Well, it’s very simple. Since the race had over 2000 racers, it would be impossible to start everyone off at once*. The fellow who sneaked in ahead of me probably started a few hours after I did. 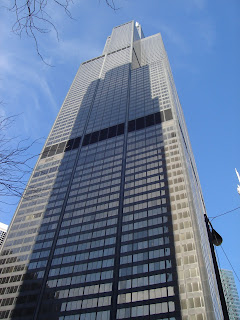 I flew to Chicago on Saturday morning before the race. It was a short flight and I got there ahead of schedule. As soon as I landed, I rushed to the Willis Tower to pick up my race packet since they don't allow day-of-race pickup (note to self: next year spend the extra 12 bucks to get the packet sent via mail). Along the way, I caught my first glimpse of the Willis Tower. At first, I thought “Hey, this building isn't THAT high.” But as soon as I rounded the corner, the rest of the building came into view. I was stunned at how tall the building really is.


At the tower, I finally picked up my race packet and met up with my friend Ed, a racer I met in Boston. We went out to lunch and afterward toward Chicago’s Magnificent Mile, with Ed pointing out some of the other famous buildings**. Later, Ed decided to take a nap before dinner and I decided to check out China Town.

Chicago’s China Town is pretty large, but oddly enough it was pretty deserted. Unlike the China Town in NYC, there was actually plenty of on street parking. The stores seemed pretty similar to the other places I’ve been and I spent my time looking at children’s books (which I can almost read) and looking for something to eat. I eventually settled on a small bakery. I ate a small bowl of fried rice and spent another hour or so reading a novel. After leaving China Town, I made my way back to downtown to meet up with a bunch of other stair climbers at the “Elephant & Castle” for dinner.


Admittedly, I was a little nervous going to dinner with a bunch of strangers, even though I already knew a lot about many of the top stair climbers. However, the host of the dinner, Mark Trahanovsky welcomed me almost as soon as I set foot in the door and he introduced me to a number of other stair climbers. He even gave me my very own West Coast Labels shirt!
At dinner I sat next to Ed and my new friend Nelson. Conversation mainly centered around stair climbing (what else!) and I learned another fellow at our table, Mark Hammond, also hails from the Albany area. Hopefully he’ll be able to get me into one of the government towers to train. Getting into a skyscraper to train would be a god-send, since I currently train in a tiny 7 story building with a faulty elevator.


For dinner I ate a veggie burger & salad and Stan passed around cookies for dessert. I think he was secretly trying to weigh us down before the big race :)

I left dinner a little bit early to get some well-needed sleep, but I did get to meet several other well-known stair climbers that night including: PJ Glassey, Brady Renshaw, Jesse Berg, John Osborn, Kristen Frey, Rolf Majcen, Javier Santiago, and a bunch of others. Take a look at the race results and you’ll see why they are well-known.


In my hotel room I ate a small snack (Lara bar & nuts) and was asleep by 10:00. Although I had to be up by 4:45 AM to catch the “L” back to downtown I had a couple of nice advantages: (1) Daylight savings gave me an extra hour of sleep (2) My body was still on East Coast Standard time. Although I was nervous and had trouble sleeping, I still managed to get in at least 6 hours.


The next morning, I quickly got ready and was on the “L” by 5:20 or so. On the train, I downed a couple of cans of iced coffee (for the caffeine), ate a banana, a few grapes, a peanut butter cliff bar, and a raisin English muffin. I finally got to Willis about an hour before the start of the race.


The next hour or so was kind of a blur. All I remember was going to find the men’s bathroom and finding it amusing how long the women’s line was compared to the men’s.
About 20 minutes before the race, I started to seriously warm up: Dynamic stretches, 75 jumping jacks, 10 burpees/pushups, + 2 minute rest. Repeat. Closer to the race I incorporated 15 power push-ups into my routine since they are a great way to get the heart rate up without tiring the quads and biceps.


Finally, the racers started to line up. I wanted to place myself a few spots behind Mark and PJ since I assumed they were aiming for a similar time (under 16:00). Since I hadn't a clue how to pace myself, I figured I could just get behind them and keep pace. At 7:00 AM the race started the organizers let in the first racer. Every seven seconds they’d let the next person in line go up and suddenly I found myself in the stairwell.


I went out at what I thought was a reasonable pace, but I quickly caught up to the next fellow and passed him. Next I passed PJ with his video gear and metronome. At that point (perhaps around the 7th floor or so) I realized I went out to fast. Although my pace was much slower than my training climbs (which are up a 7 story building) I knew I could only keep that pace up for another few minutes. I slowed down a little bit and simply focused on hauling myself up the rails and making clean turns. I could still hear PJ’s metronome down below and it helped me keep ahead.


Then, from out of nowhere, another racer appeared bounding up the stairs like a two-legged gazelle. I thought to myself “who the #@$% is this guy? Weren't all the fast climbers ahead of me?” Even though I was less than half way through the race, I knew I wouldn't be able to keep up with this guy for more than a few floors. He ended up passing me like I was standing still. At that point I tried to speed up and quickly realized it would be fruitless to chase. Later, I learned that this mysterious racer was none other than Sproule Love, one of the top climbers in the world who would go on to win the race and set a new record.


I continued my climb and here were my observations:

1)  It was hard to keep only one foot on the landings when landing with my left foot. My right hip would frequently bump into the railing while going around the turn and I felt like I was losing too much energy trying to contort my body. I would need to learn how to climb so I’d only land with my right foot, but I couldn't think straight to adjust myself during the race (oxygen deprivation does that to a fellow).

2) The stairwell numbers were hidden from freakin’ view and I only remember groupings of numbers being visible (e.g. signs that would show “floors 42 – 56”). I frequently had to ask the race volunteers where I was.

3)  Looking at my watch, I hit the halfway point somewhere around 7:20 or so and I *knew* I went out too fast. I couldn’t keep up the pace for another 50+ stories.

Sure enough, I saw another climber catching up to me ever so slowly. It turned out to be Kristen
Frey (who would eventually come in 2nd among women) and there wasn't very much I could do about it. At that point I was pretty exhausted and was just trying to conserve energy. She chased me for a few more flights and then I let her go by. I used what remaining energy I had to shout some encouragement. I kept going and eventually fell into place behind Kristen. I could tell she was only a couple flights ahead; although I couldn't see her, I could hear the cheers of encouragement from the race volunteers. I remember looking at my watch and trying to figure out what floor I was on, but I all I remember is having a sinking feeling I wouldn't reach my goal time. And then at some point the stairwell changed direction, which was actually a godsend. The rails were close enough together so I could use both at once.

Somewhere after hitting the 16 minute mark, I started to kick it into high gear. With Kristen only a couple flights ahead and being somewhere in the mid 90s, I figured I had a shot of coming in below 17:00. I staggered through the final doorway and almost collapsed. I stumbled for a brief moment, but I was able to continue walking. I was actually a bit angry with myself. If I had enough energy to keep walking, then I should’ve pushed harder in the 80’s and 90’s. At the Boston Race a few weeks ago, I was on the ground for a few minutes before I had enough energy to get up.


Suddenly, I snapped back to reality and realized that I had forgotten to look at my watch to look at my finishing time. My watch said 7:16 but I knew I had been walking for a bit of time, so I was pretty sure I broke 17:00 minutes! Although it wasn't a great performance, it certainly wasn't a bad time, especially since this was only my 3rd race and I had no idea how to pace myself. Plus, I’m guessing that shorter climbs are my forte considering my build and training regimen.


After meeting a bunch of other racers at the top, I decided to go back down to get my camera to snap a few photos. Although I had to talk my way back onto the elevators (and jump over a railing) I managed to get back to the observation deck and snap a few photos. After socializing a bit, I met up with my friend Michael Karlin who not only climbed up the tower but participated in the hand cycle race. Although he hadn't trained for the race (and just finished a grueling climb) he came in an impressive 3rd place in his heat. Next year I want to enter, too.


Since we both had a few hours to kill, we went out for lunch and walked to the planetarium. Although I didn't have time to actually go into the Planetarium, I bid farewell and to a stroll through the park on my way to the “L”, snapping a few more photos on the way.

Last but not least, it was only fitting to run into Mark Trahanovsky on the way back to the airport. We chatted for a bit about the race as we headed toward the gates. All-in-all it was a pretty satisfying weekend and I can’t wait to do it again next year.

* tell that to the Empire State Run-up organizers.
** with stair climbing races
Posted by Alex at 7:47 PM