The Fear of Sears

For the past few weeks I've been stressing out about racing up the Sears Tower (aka Willis). The height of the building is so intimidating that every time I see the Chicago skyline, a shiver runs down my spine. The building is over 400 meters tall, which is a good 200 meters outside of my comfort zone. My biggest fear is that I'm too heavy to do really well at this race*. I'm also worried that if I don't go below sub 15 minutes this year, I'm never going to gain the respect of the climbing community. All the other big names out there post 14:30 or less, and that is just outside my capability. In fact, my goal this year is just to break 15:00.

*Let me clarify - when I say heavy, I really mean my BMI is too high. There are faster climbers who weigh more than I do, but most of them are several inches taller.

In fact, after the US Bank Tower race in LA, I was ready to bag Sears altogether.I'd much rather make my mark in a shorter building than putt up a mediocre time in a tall building.The main reason I'm doing this race is because I signed up for the race several months in advance and since I already reserved a spot, it would be a shame to waste it*. Additionally, the race is worth 300 points on the US racing circuit and I need those points to boost my ranking.

*I completely forgot that I signed up for Sears back in July. Imagine my surprise when I received an email from the event organizers, literally hours after I made my decision to skip Sears.

So now that I'm doing the race, most of my free time is spent thinking about how I can hold off my rivals and put out a fast time. I admit, I'm a bit obsessive about both.

First off, lets take a look at where I stand on the rankings.

As you can see, I'm within striking distance of everyone except Jesse*. Other than Sproule (who isn't racing Sears) everyone else already has 5 races and I only have 4. Since the rankings are based on an athlete's 5 best races, I'm the only racer guaranteed to receive points at Sears.

Using the data from the table above, I've calculated the minimum place I need to catch up to each of my rivals depending on how well each one of them does at Sears. 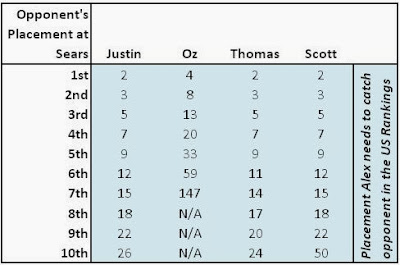 Here are my estimated chances at defending my current rank and overtaking the people ahead of me:

Jesse: Not only is Jesse too far ahead for me to gain ground, he is one of the favorites to win the race! He is still out of my league.

Sproule: I purposefully left him off of the table above since he isn't racing Sears. To catch up with him, I'll need a 7th place showing. However, I also need to consider the fact that Sproule is entitled to another 50 points for winning at Hartford earlier this year. If these points are included, I'll instead need a 4th place showing which is possible, but unlikely.

Justin: On paper I have a shot at overtaking him in the rankings, but realistically my chances are pretty small. Just like Jesse & Sproule, he is out of my league; he is one of the few climbers that can easily beat me at any distance. Therefore, I'm expecting him to sit on the podium and he is one of my favorites to win the race. Plus, it may be a moot point. If he races WaMu in Seattle (a 200 point race) I'm pretty sure he'll increase his overall point tally.

Oz: I have a pretty good shot at defending my position in the rankings, but I expect Oz to challenge for a podium spot. He is significantly faster than I am in longer races and Sears is the tallest race in America! Personally, I'd like to see him to win the race - he is one of the nicest guys on the circuit - but I have a feeling he'll come in around 3rd or so. This means I just need a top ten showing to keep ahead.

Thomas: I have a pretty good shot at overtaking him in the rankings. The real challenge will be to keep ahead of him in the stairwell. He has been right behind me in each of the races we've contested and in LA he was a mere second behind me. This means that as much as I've improved over the last year, Thomas has improved faster. Factor in that Sears is my weakest race and that Thomas favors tall buildings, I think he'll finally have the edge.

Scott: I have a very good shot at overtaking him in the rankings. Although his rate of improvement has been phenomenal, I don't see him beating me quite yet. Instead, look for him to battle for a podium spot in his age group.*

*My friend Napoleon is in the same age group. I imagine he'll say something like: "Scott, let's settle it gunslinger style in the stairwell. lololo."

As you might have noticed, I've put a lot of thought into how well I expect my rivals to perform at Sears, but the fact is I need to bring my "Beast Mode"* when I come to Chicago.

*To steal a phrase from Karen.

The fact is, I've been using the excuse that "I'm not suited for tall buildings" for far too long. I can't let my let my perceived weakness prevent me from doing well. Although I'll probably always be scared of Sears, I still have to find a way to perform. The good news is I've been doing nearly everything I can to make sure I break 15:00.

*regretfully my long rides are currently on hiatus due to a hamstring injury.

I'm coming into this race in the best shape of my life. I've even improved since last month's race in LA. Although I'm scared of Sears, I know I've done everything possible to prepare. Although my hear rate is beating 120 beats per minute just thinking about the race, I can't wait to be in the stairwell!
Posted by Alex at 2:05 PM